Nine  artists have been selected to make new work for the Bideford Black: The Next Generation project ahead of a special exhibition at the Burton Art Gallery in October 2015.

Bideford Black is a unique pigment found only in Bideford. This project connects the heritage of the area with the tradition of using it as an artist’s material, commissioning and documenting its use by contemporary artists, developing a greater understanding of this rare material in a contemporary artistic context. 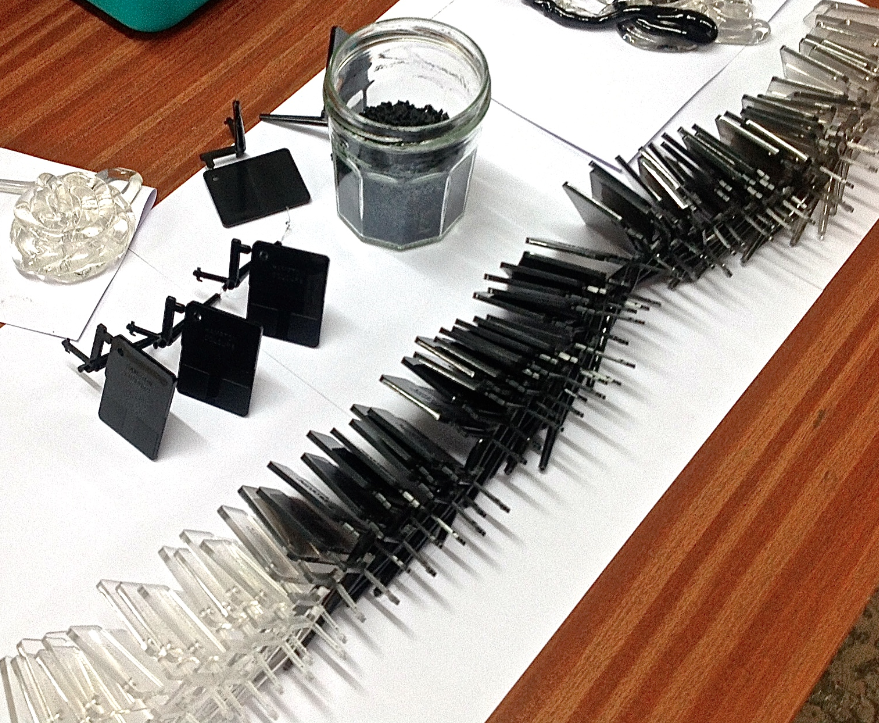 On the 11th March, there will be an early opportunity to meet one of the artists at the gallery when Luce Choules will be presenting her recent alpine fieldwork project Guide74 in a special ‘performance lecture’. She will also introduce Seam, the new choreographed exhibition she is creating for Bideford Black: The Next Generation. A Fellow of the Royal Geographical Society, Choules explores physical and emotional geography through experimental fieldwork.

Selected by open call last autumn, all of the artists are developing new artworks either with, or about, Bideford Black pigment, for the Burton’s permanent collection.

Devon-based artist Tabatha Andrews works in a range of media including drawing and casting forms in paper.

Artist duo ATOI, based in Cornwall, are exploring the transformation of material from one form to another. The pair are experimenting with using Bideford Black in false diamonds and even as a surface for martial arts.

Inspired by Bideford’s historic industries and their workers, and society’s pre-occupation with the natural, London-based artist Corinne Felgate will set up a temporary cottage industry at a North Devon location. Using only local natural materials, Felgate will create 100 small objects for applying ‘Bideford Black mascara’.

Prompted by Bideford Black, and using a shared sketchbook, artists Neville Gabie and Joan Gabie are holding a ‘dialogue of ideas’ with Cultural Geographer Ian Cook (University of Exeter). Together, the artists explore the physicality, social and geological significance of Bideford Black, creating an artist’s film and drawings.

Lanarkshire-based artist duo Littlewhitehead are interested in the environmental processes forming Bideford Black: what would the Carboniferous period have sounded like? Their developing commission is tightly under wraps, but may incorporate experimental sound recordings or Bideford Black discs resembling vinyl LP records.

Lizzie Ridout will set Bideford Black within a new taxonomy – or story – of the colour black. Incorporating her research into the subject, the Cornwall-based artist will create a printed publication, presented as a sculpture, pieces of which audience members may be able to take away.

The final artist, Sam Treadaway is working with Bristol botanists to create a scent inspired by Bideford Black. The scent will be interactively transmitted into the gallery space using a bubble-blowing machine developed by roboticists from the University of the West of England.

Film-maker Liberty Smith is documenting the Bideford Black: The New Generation project. As well as filming the eight artists and artist duos as they research and create their work, Liberty will film the landscape around Bideford and the North Devon coast. Smith’s film will be premiered as part of the project exhibition in October 2015.

To get an inside glimpse of those involved in the project do join the upcoming talk by Luce Choules on  11th March at 7pm at the Burton Art Gallery. This is a free admission event, but booking is advised  -  tel 01237 471455 or email burtonartgallery@torridge.gov.uk.

And another date for your diaries, “Bideford Black: The Next Generation Exhibition” opens on 3rd October at the Burton Art Gallery and Museum, Bideford, Devon, EX39 2QQ